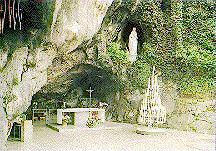 On February 11, 1858, one of the most famous of all Mary's apparitions began. Our Lady appeared to a 14 year old peasant girl named Bernadette Soubrious.

She was the oldest daughter of one of the poorest families in the town. Her father was out of work. Bernadette was sickly and had to be kept from the cold and working too hard. Despite this, she was allowed one day to go collecting firewood with two friends. The people of that time cooked and heated their houses with firewood. She and her friends passed by the rock of Massabielle (big rock in the local dialect) a craggy outcropping in a wild and deserted part of the countryside.

After a little while, Bernadettes' friends decided to cross the river that ran near the rock. The water was cold, and Bernadette didn't want to get her feet wet. She stayed on the other side for a while and then sat down to take off her shoes, because she didn't want to be left behind. Suddenly, she heard a loud noise, 'like wind.' Turning she saw 'a beautiful Lady' dressed in white with a rosary hanging from her arm, standing in a small cleft or grotto in the rock. The Lady smiled at her, beckoned her to approach and they prayed the Rosary together. Bernadette prayed and the Lady joined in for the Glory Be.

At first, when she said what she had seen, she was not believed, and her mother said she couldn't visit the site again. Bernadette obeyed her mother. A few day later, some friends who had heard about it, asked Madame Soubrious if Bernadette could go back to the grotto. Then her mother gave permission.

On February 18, the Lady asked Bernadette to come for 15 days. Day after day, ever time Bernadette went to the rock and the Lady appeared, she told Bernadette a little more. More and more people went with Bernadette. They did not see the Lady, but they could tell that Bernadette was seeing something very special and beautiful, because Bernadette looked so happy and beautiful herself when the Lady was there.

The Lady told her that we all must, "Pray for the conversion of sinners," have "Penance, penance, penance!," and "Go tell the priests to have people come here in a procession and to have a chapel built here." On February 25, two weeks after the beginning of Her appearances, the Lady of the grotto made a new spring of water well up near Bernadette. The Lady told her to drink from it and wash herself in it.

That spring is still there today. Many people go to visit the Shrine of Our Lady of Lourdes and take away Lourdes water. Many people have been healed of all kinds of illnesses when they visited the shrine at Lourdes and either drank the water or bathed in it.

Our Lady appeared to Bernadette 18 times. Finally on March 25, the Lady told Bernadette "I am the Immaculate Conception." Bernadette didn't know what these words meant, but she very carefully remembered them and repeated them to herself so that she would remember them correctly. Bernadette went straight to the priest's house and said the words to the village priest. He knew what they meant and was very surprised.

The Immaculate Conception means that Mary was created in her mother's womb and born without sin. Of course, anyone who was going to be the Mother of God, and carry Jesus in her womb would have to be without sin herself. Mary is the only person in the whole world, besides Jesus who was born without Original Sin. The declaration to the Church and the world, that Mary was the Immaculate Conception had only been made 4 years before Bernadette heard it from the Lady herself.

Since Bernadette could not have made up words that she didn't understand, it became obvious that the Lady in the Grotto was the Virgin Mary herself, and that the little village of Lourdes had been greatly honoured by her appearances there. Many millions of people have been to Lourdes in the 140 years since the Apparition of Our Lady of Lourdes. The testimonies of renewed faith and miraculous healing would fill many books.

Some sites to visit that have pictures and the story of Lourdes in more detail:

A Visit to Lourdes

A tourist's visit to Lourdes

Our Lady of Lourdes

Stations of the Cross at Lourdes, part of a Lutheran church website!

The Story of Saint Bernadette

Prayer: Merciful God, come to the aid of our frailty. May we who keep the memory of the Immaculate Mother of God, rise from our iniquities with the help of her intercession. Amen.